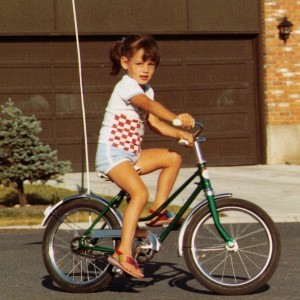 Don’t I look like a carefree child? The horrors of piñata demise had yet to enter my innocent mind.

My mom sent me an email the other day wishing me luck with the upcoming “smash and bash” portion of the pinata project.  Apparently I haven’t always been so dead set on pinata destruction.

My pinata education began early, at the ripe old age of 5.   I’m not sure what the parenting books say about the best age to introduce pinatas to your child.  I suppose I was a late bloomer pinata-wise, because my first pinata experience was not a great one.

My fifth birthday was shaping up to be the birthday event of the year. Actually no.  I turned 5 back when birthdays didn’t require a second mortgage, a traveling circus, or a spread worthy of Martha Stewart.  What my fifth birthday did have however, was a pinata.  I had no idea what a pinata was, but I was probably swayed by the inclusion of candy.  If we’re being honest here, I have no memory of any of this stuff, my mom’s email had to fill in the gaps in my memory.

Apparently, we had constructed the pinata together (now that I’ve made a pinata I can only imagine the hell that ensues if you introduce a child into the messiness of the mache), she told me what would happen during the “bashing phases” but I had been on board with the phrase “candy falling from the sky”.

In actuality, a different scenario played out.  When my best friend stepped up as the first “basher”, I lost it.  When this “friend” struck the pinata with a hockey stick, I let out a scream as though I had been hit.  And, according to my mother “no amount of candy would console you”.

Is it any surprise I’m approaching the upcoming destruction with nervous anticipation?  I hope I can move past the black mark in my pinata past and bash the sucker with enthusiasm.